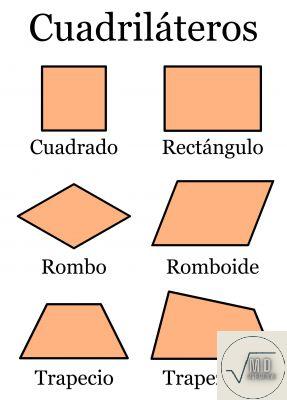 Different types of shapes differ from each other in terms of sides or angles. Many shapes have 4 sides, but the difference in angles on their sides makes them unique. We call these 4-sided shapes the quadrilaterals.

What is a Quadrilateral?

Quadrilaterals are everywhere! From the books, chart papers, computer keys, television, and mobile screens. The list of real-world examples of quadrilaterals is endless.


A rectangle is a quadrilateral with 4 right angles (90°). In a rectangle, both the pairs of opposite sides are parallel and equal in length.

Rectangles are very handy to have around. For example, shoe boxes, chopping boards, sheets of paper, picture frames, etc., are rectangular in shape.

Rectangles are easy to stack because they have two pairs of parallel sides. Their right angles make sure built things such as houses, office buildings, schools, etc., stand straight and tall.

A square is a quadrilateral with 4 right angles (90°). In a square, both pairs of opposite sides are parallel and equal in length.

Properties of a square:

Real-life examples of squares include computers, keys, coasters, spaces on a chessboard, etc.

A rhombus is a quadrilateral with all four sides having equal lengths. The Opposite sides of a rhombus are equal and parallel, and the opposite angles are the same.

The diagonals AC = BD, and M is the point of intersection of the two diagonals.

A trapezium or a trapezoid is an equilateral with one pair of opposite parallel sides. The sides of a trapezium are known as bases, and the perpendicular line from any vertex of the trapezium to the base is known as the height.

ABCD is a trapezium in which side BD is parallel to side CA. The perpendicular line DM is the height (h) of the trapezium, while BD and CA are the bases.

A kite is a quadrilateral with two pairs of side lengths, and these sides are adjacent to each other.

Properties of a rhombus

The properties of quadrilaterals include:

The quadrilaterals are classified into two basic types:

Let’s work on a few example problems about quadrilaterals.

By a property of quadrilaterals (Sum of interior angles = 360°), we have,

The total sum of interior angles of in a quadrilateral = 360°

Subtract both sides by 80 to get;