A radical expression is composed of three parts:

In this tutorial, the primary focus is on simplifying radical expressions with an index of 2. This type of radical is commonly known as the square root.

Components of a Radical Expression

We need to recognize how a perfect square number or expression may look like. Let’s do that by going over concrete examples.

What makes them perfect squares?

Notice that the square root of each number above yields a whole number answer. Think of them as perfectly well-behaved numbers.

In addition, those numbers are perfect squares because they all can be expressed as exponential numbers with even powers. The powers don’t need to be “2” all the time. As long as the powers are even numbers such 2, 4, 6, 8, etc, they are considered to be perfect squares. One way to think about it, a pair of any number is a perfect square! 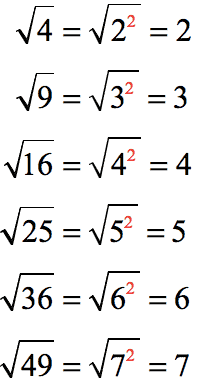 More so, the variable expressions above are also perfect squares because all variables have even exponents or powers.

Examples of How to Simplify Radical Expressions

This is an easy one! The number 16 is obviously a perfect square because I can find a whole number that when multiplied by itself gives the target number. It must be 4 since (4)(4) =  42 = 16. Thus, the answer is

Below is a screenshot of the answer from the calculator which verifies our answer.


You can do some trial and error to find a number when squared gives 60. Going through some of the squares of the natural numbers…

The answer must be some number n found between 7 and 8. So we expect that the square root of 60 must contain decimal values. To simplify this radical number, try factoring it out such that one of the factors is a perfect square. By quick inspection, the number 4 is a perfect square that can divide 60.

So our answer is…

And for our calculator check…

What rule did I use to break them as a product of square roots? Here it is!


Remember the rule below as you will use this over and over again.

Compare what happens if I simplify the radical expression using each of the three possible perfect square factors. Picking the largest one makes the solution very short and to the point.

Looks like the calculator agrees with our answer. Great!

Another way to solve this is to perform prime factorization on the radicand. Then express the prime numbers in pairs as much as possible. The paired prime numbers will get out of the square root symbol, while the single prime will stay inside.

And it checks when solved in the calculator.

Let’s find a perfect square factor for the radicand. Although 25 can divide 200, the largest one is 100. Next, express the radicand as products of square roots, and simplify.

The calculator gives us the same result!

The radicand contains both numbers and variables. Let’s deal with them separately.

For the numerical term 12, its largest perfect square factor is 4. Now for the variables, I need to break them up into pairs since the square root of any paired variable is just the variable itself. The solution to this problem should look something like this…

The standard way of writing the final answer is to place all the terms (both numbers and variables) that are outside the radical symbol delante of the terms that remain inside.

For our calculator check…

The calculator presents the answer a little bit different. However, I hope you can see that by doing some rearrangement to the terms that it matches with our final answer. Fantastic!

For this problem, we are going to solve it in two ways. The goal is to show that there is an easier way to approach it especially when the exponents of the variables are getting larger.

Método de emparejamiento: This is the usual way where we group the variables into two and then apply the square root operation to take the variable outside the radical symbol. You will see that for bigger powers, this method can be tedious and time-consuming.

“Division of Even Powers” Method: You can’t find this name in any algebra textbook because I made it up. However, the key concept is there. The main approach is to express each variable as a product of terms with even and odd exponents. If the term has an even power already, then you have nothing to do. Otherwise, you need to express it as some even power plus 1.

Remember that getting the square root of “something” is equivalent to raising that “something” to a fractional exponent of {1 over 2}.

Simply put, divide the exponent of that “something” by 2.

Let’s simplify this expression by first rewriting the odd exponents as powers of an even number plus 1.

Express the odd powers as even numbers plus 1 then apply the square root to simplify further.