La palabra serie implica suma. We can transform a given arithmetic sequence into an arithmetic series by adding the terms of the sequence. The example below highlights the difference between the two.

Notice that in a sequence, we list the terms separated by commas while in a series, the terms are added as indicated by the plus symbols.

Por lo tanto, un serie aritmética is simply the sum of the terms of an secuencia aritmética. More specifically, the sum of the first largecolor{red}{n} terms in an arithmetic sequence is called the suma parcial. The partial sum is denoted by the symbol large{{S_n}}.

Below is the general form of the arithmetic series formula. This works best if the first and the last terms are given in the problem. 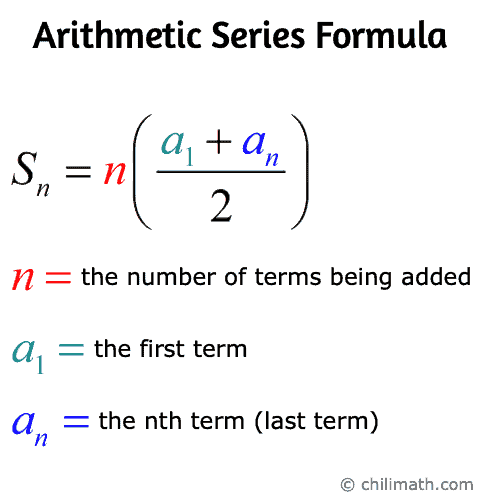 ▶︎ The Arithmetic Series Formula is also known as the Partial Sum Formula.

▶︎ The Partial Sum Formula can be described in words as the product of the average of the first and the last terms and the total number of terms in the sum.


▶︎ The Arithmetic Sequence Formula is incorporated/embedded in the Partial Sum Formula. It is in fact the nth term or the last term largecolor{blue}{a_n} in the formula.

Below is the alternative formula of the arithmetic series. Consider this if the last term is no es dado. 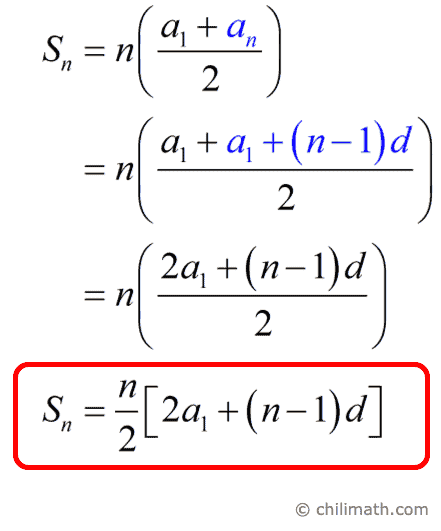 large{{d}} is the common difference

large{{n}} is the number of terms in the sum

Ejemplo 1: Find the sum of the first 100 natural numbers.

This is an easy problem. The purpose of this problem is to serve as an introductory example. This should help you get familiar quickly with the arithmetic series formula. Once you have a basic understanding on how to use the formula, you should be able to tackle more demanding problems as you will see later in this lesson.

Recall that the natural numbers are the counting numbers. We can write the finite arithmetic sequence as

and its related arithmetic series as

Substitute the values into the formula then simplify to get the sum. 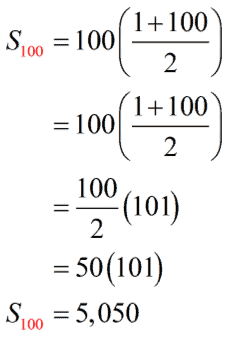 Ejemplo 2: Find the partial sum of the given arithmetic series.

If this is your first time solving this type of problem, you may find this a bit overwhelming. Not that it is difficult but because the values that you need are not explicitly given. This can throw you off because you don’t even know how to get started. However, if you have a strategy from the beginning you will realize this problem is not that bad.

What we need to do is to examine the given series. Identify the values that are pertinent and useful to us. Sometimes by doing it this way, the next logical step will be revealed to us. 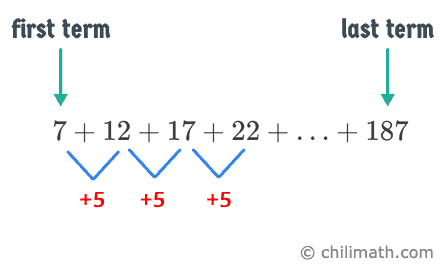 I hope at this time, you can agree with me that we have no other option but to use the nth term formula to find largecolor{red}n. Once we find the value for large{n}, we will substitute that into the arithmetic series formula together with the first and last terms to find the sum of the given arithmetic series. 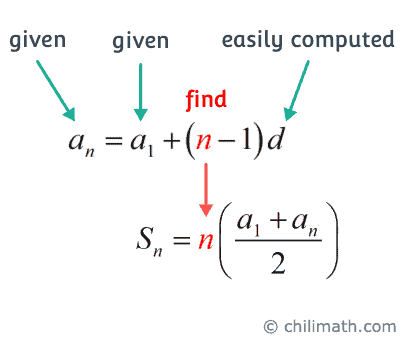 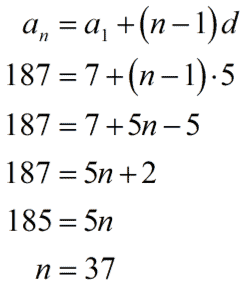 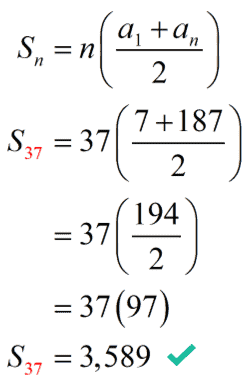 Ejemplo 3: Find the sum of the first large{51} terms of the arithmetic sequence.

The strategy here is similar to Example 2. Instead of finding the number of terms largecolor{red}n, we will use the nth term formula to find the 51st term. Then, we use the the arithmetic series formula to calculate the sum of the first 51 terms of the sequence. 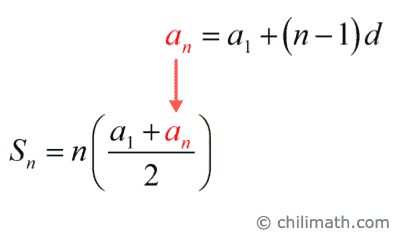 So what value can we extract from the given problem?

Well, the number of terms largecolor{red}n to be added is explicitly given in the problem which is n=51. 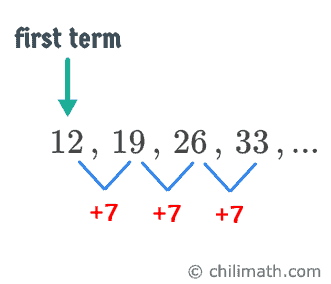 So here is the information we have gathered. It means the nth term is what we are looking for.

Plug in the values into the nth term formula then simplify to get the 51st term. 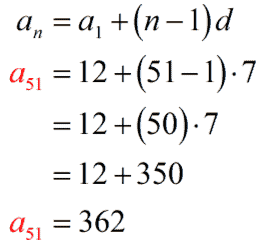 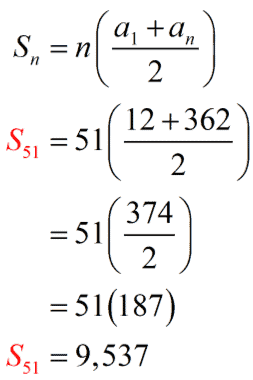 Now, this is the system of equations that we are going to solve. We can find the values of the first term large{a_1} and the common difference large{d}.

We will solve this system of equations using the Elimination Method. We subtract equation #2 from equation #1 to get rid of large{a_1}, thus isolating large{d}. 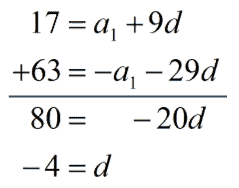 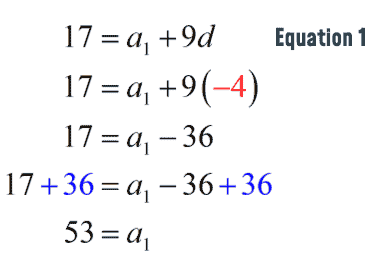 By knowing the first term, and the common difference of a sequence, we can put together the formula that can determine any term in the sequence. 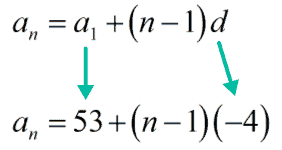 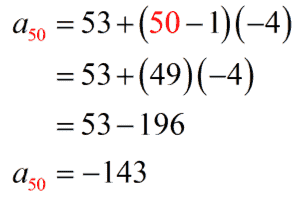 Finally, we have all that we need to compute for the 50th partial sum using the arithmetic series formula. 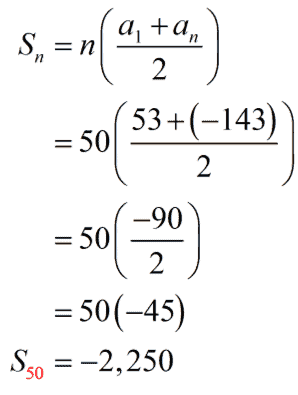 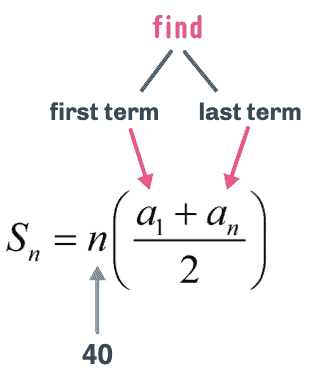 Now, let’s construct a system of equations wherein the unknown variables are the first term large{a{}_1} and the common difference large{d}.

El primera ecuación comes from the given information that large{{a_{10}} = 23}. Plug the values into the nth term formula.

El segunda ecuación comes from the given information that large{{S_{12}} = 192}. Plug the values into the alternative arithmetic series formula. 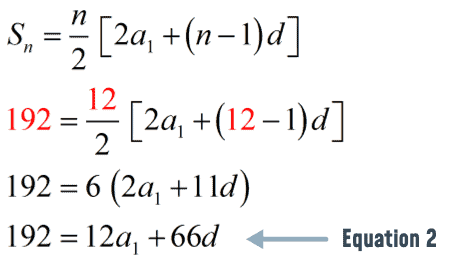 This is the system of equations that we are going to solve by the Elimination Method. 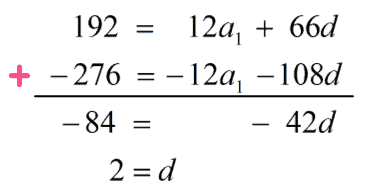 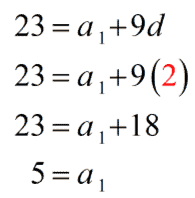 Since we know already the values of large{a{}_1} and large{d}, we are now ready to write the general term of the sequence which can find any term in the sequence. 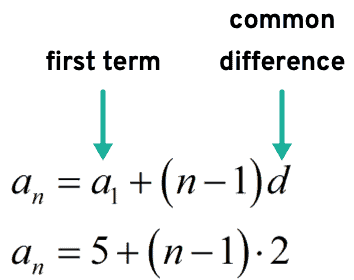 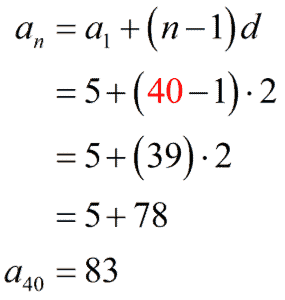 Finally, we have all the required values as shown below to calculate the 40th partial sum.

Plug in the values into the arithmetic series formula then simplify. 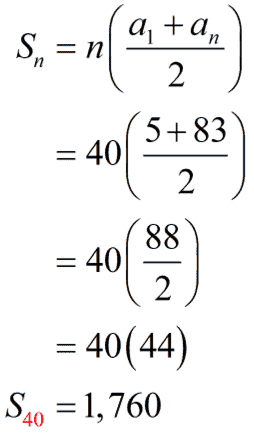 Derivation of the Arithmetic Series Formula